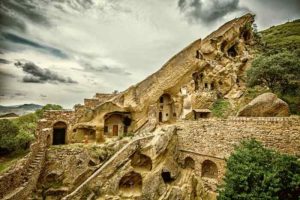 Davit Gareja Davit Gareja is a rock-hewn Georgian Orthodox monastery complex located in the Kakheti region, East Georgia, on the half-desert slopes of Mount Gareja, 60–70 km southeast of Georgia’s capital Tbilisi. The complex includes hundreds of cells, churches, chapels, refectories and living quarters hollowed out of the rock face.“High in the cliffs of eastern Georgia’s rugged and remote border with Azerbaijan, Georgia’s Davit Gareja is a complex of 19 medieval cave monasteries. Considered masterpieces of Georgian art, the caves once housed nearly 5,000 monk cells. One cave is still functioning as a monastery, and monks can sometimes be heard chanting in the silence of the deserted steppe.”

The monastery of St. Nino  Enclosed in Bodbe Cathedral is the grave of St. Nino, a most remarkable female figure in the early history of Christianity. There she soon gained fame for healing people in the name of Jesus Christ. 850, on the original site of St. Nino’s church, which has not survived. Bodbe Cathedral is a three-nave basilica with a truncated long axis, typical of Georgian churches. Therefore fewer supporting piers. proximity from the capital (100-110kmfrom Tbilisi)  It is also favorite touristic destination. 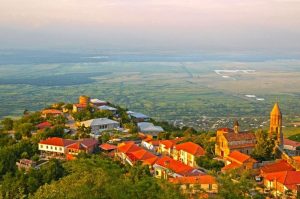 Sighnaghi – is a tiny town atop a hill in the Kakheti region, and probably the prettiest town we’ve seen in Georgia to date. It’s also have cobblestone streets, a (mostly) intact old city wall, charming houses, and views to die for. Situated on steep hills overlooking the Alazani Valley and facing the Greater Caucasus Mountains, the town of Signagi, in Georgia’s easternmost region of Kakheti. Town is known for-carpet weaving. Wine production, metal crafting, ceramics, wood carvings and leather work.  It is also favorite destination for cuples – The city of love