Mtskheta – UNESCO World Heritage Site. It was once the capital of the early Kingdom of Iberia (today’s Eastern Georgia). Just 20 km from Tbilisi, at the confluence of the Mtkvari and Aragvi rivers. the city is located on an ancient trade route. Archaeologists have unearthed evidence of Mtskheta’s status as a major trading post.

Svetickhoveli cathedral – main Christian Orthodox Cathedral in Georgia, built during 1010-1029 cc by the Georgian architect Arsukisdze. Represents the high artistic value of Feudal time’s architecture. It was the main pilgrimage place on the Silk Road. The burial place of the Christ’s Robe. The tomb place of Georgian Kings . 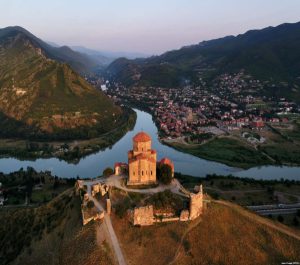 Jvari monastery  – The masterpiece of Early Christian Orthodox architecture Jvari Monastery is dated during 585-604 cc AD. Located on the hill top near the town Mtskheta, it is listed in UNESCO World Heritage Site list in 1994. According to traditional accounts. In the early 4th century Saint Nino stayed here to pray and erected a wooden cross on Mtskheta’s highest hill.

Ioseb Stalin’s State Museum– museum complex consists of memorial house. Where Stalin was born, exposition building with tower and Stalin’s personal coach with interior, by which he had travelled to Tehran, Yalta. In Museum house you will see Stalin’s personal things. Study room , manuscripts, gifts, Stalin’s mask and paintings.

Uplistsikhe Caves .– Located in Eastern Georgia, is an abandoned rock-hewn town, which once have played an important role in Georgian history. It was once the home of the Georgian queen Tamar. Even from afar this quaint rocky city looks bewitching. Looking like giant pores on the rocks gape the cave grottoes, which used to be full of life. Long time ago there were huge majestic halls, temples, dwellings connected by winding corridors of streets. Mtskheta stalins museum upliscikhe Tour.