Day tour starting at 9 am – 21:00 pm – from Tbilisi it’s not standard day tour, Because of high interest with this places we are making this trip. 2 day itinerary   is better for this and additional destinations*

Borjomi. Is famous for its mineral water industry (which is the number one export of Georgia). Because of the supposed restorative and healing powers of the area’s mineral springs. It is a frequent destination for people with health problems. Borjomi is also home to the most extensive. Ecologically-themed amusement park in the Caucasus. proximity from the capital (160-180kmfrom Tbilisi) 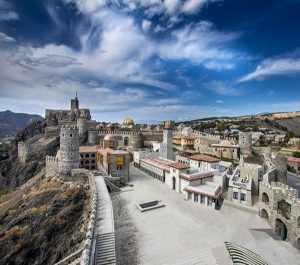 Rabati Castle. – Was built in the 13th century. castle developed under the influence of diﬀerent cultures over. Subsequent centuries and this is reflected in its architecture. Within the 7 hectares castle complex there is a Church, a Mosque, a Minaret and a Synagogue. It is also favorite destination to see combined old and new Georgia. Rabati

Vardzia caves  – was erected in the 12th-13th centuries. During the rule of George III and his daughter of Tamara. visit Georgia vardzia caves.  For the purpose of the southern boundaries of Georgia protection. It is a multi-storied complex with streets. Tunnels and stairs leading to monasteries, temples. Fortresses, baths, libraries dwelling houses and so forth. The territory of Samtskhe-Javakheti served as a barrier separating the rest of the country from the Moslem world. It is also favorite touristic place in Georgia.

The tongue-twisting southern flank of Georgia is a highly scenic region whose biggest attractions are the spectacular cave city of Vardzia. And beautiful Borjomi-Kharagauli National Park. Which offers good mountain hiking. Landscapes are very varied. Proximity from the capital ( 500-550km from Tbilisi ).