Tusheti Georgia – If you are come to Georgia feel the real magic of highlands face to face with nature, to walk on the edge of Christianity and paganism, and conquer narrow mountain trails over steep cliffs, then your way should lead straight to Tusheti.

Tusheti Georgia it means;- Amazing mountainous region in northeastern Georgia. Bordering the historic region of Khevsureti, as well as Russia’s Chechnya and Dagestan, is a real treasure of the Georgian part of the Caucasus. It’s not an easy drive to the region: the road to Tusheti is mostly open from June to late September-early October. 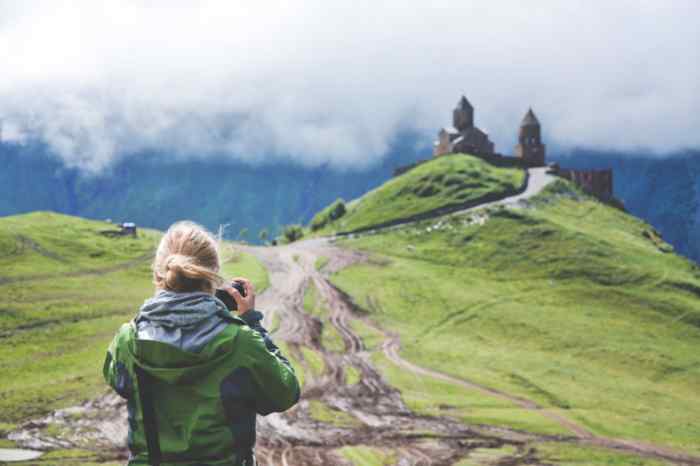 Omalo – the central village of the region, and the first you see coming to Tusheti. Several Tushetian families even stay there for the winter while other locals go down to the valleys.

A hike from Omalo to Dartlo will take about 3-4 hours. Houses and towers of Dartlo were recently restored and now included on the list of protected cultural heritage of the country.

is also a starting point to a spectacular five-day trekking path to Khevsureti. The trek begins with Dartlo to Andaki pass, covering difficult 14 kilometers, and continues with hike or horseback ride along the uninhabited mountains towards Shatili village.

This small picturesque village is located at the same altitude as Omalo but separated by a big mountain gorge from Omalo.
The only Orthodox church in the region (Sameba church, XIX c.) is located in Shenako. Its frescoes have been restored at the beginning of our century.

In Shenako, you can start your hike to Diklo, a place famous for its fortress. The local says that once in the XIX century sixteen brave warriors were defending it against the North-Caucasian army of thousands. The battle for the fortress lasted for more than two weeks!